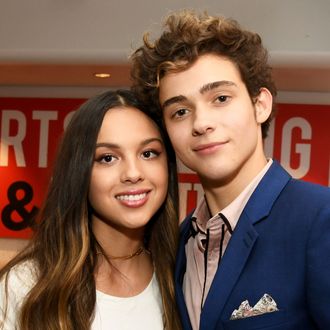 There’s a potential love triangle stewing at East View High School. Actress Olivia Rodrigo, who plays Nini Salazar-Roberts in the Disney+ original show High School Musical: The Musical: The Series, released a new single this morning, titled “Drivers License,” along with an accompanying music video. The song quickly sparked rumors about the details of her relationship with her HSMTMTS co-star Joshua Bassett. The song features some pretty pointed lyrics, which some fans believe are about Bassett and a certain blonde singer-actress, and now the teens and tweens are in a tizzy. For those of us who graduated high school before 2008, let us give you the rundown.

Rodrigo and Bassett, whose characters date in the series, had onscreen chemistry and an offscreen closeness that led to rumors about an IRL relationship. Back in August, Rodrigo posted a TikTok captioned “And that’s on failed relationships,” featuring “All I Want” from the HSMTMTS soundtrack, which Rodrigo wrote and sang in the series about Bassett’s character, Ricky. In the new track, “Drivers License,” Rodrigo laments the end of a relationship as she drives through the streets after getting her license (again, she is 17) and also mentions, “I guess you didn’t mean what you wrote in that song about me,” which fans are assuming is about Bassett, who released two singles, “Common Sense” and “Anyone Else,” last year.

Now wait — that’s not all, folks. Here’s where Sabrina Carpenter — the 21-year-old singer and actress who played Maya Hart in the Disney series Girl Meets World — makes her grand appearance. It’s also rumored that Bassett and Carpenter started dating after Rodrigo and Bassett called it quits in 2020. While they also haven’t publicly affirmed this, the two have been seen together and have appeared in each other’s TikToks, most recently where they reenact a scene from The Adventures of Sharkboy and Lavagirl. In “Drivers License,” Rodrigo refers to a “blonde girl” who’s “so much older than [her].” Carpenter is in fact blonde and is four years older than Rodrigo.

Rodrigo announced the release of “Drivers License” on January 4, and a mere hour later, Bassett announced the release of his upcoming single, titled “Lie Lie Lie,” which comes out on January 14. Followers were quick to call out the coincidence in the close posts, calling it “awkward” and “trying to steal Olivia’s thunder.” They connected an image of him dimly lit in a car to the music video that Rodrigo released with “Drivers License” today. Fans also took notice that while many cast members from HSMTMTS, including Julia Lester, Joe Serafini, Larry Saperstein, Sofia Wylie, and Dara Reneé, commented enthusiastically on Rodrigo’s post, only one, Serafini, commented on Bassett’s post. Do they know more about the drama that’s still yet to unfold? With season two coming, here’s hoping that the power of music and a dance number can mend some hearts on the HSMTMTS set.