Social media users began criticizing Pink, 42, after a photo surfaced on Instagram that appeared to show him and musician John Maus along with filmmaker Alex Lee Moyer at a hotel in the city.

Pink, an indie artist, responded to the chatter by claiming he was in fact in Washington, D.C., but instead of going to the Capitol building he stayed on the White House lawn.

“i was in dc to peacefully show my support for the president. i attended the rally on the white house lawn and went back to hotel and took a nap. case closed,” he responded to one of his followers. 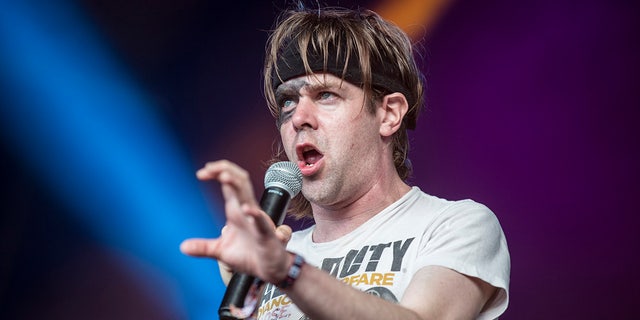 When the same follower accused Pink of “putting others at risk by being at such a massive gathering” amid the coronavirus pandemic, the musician said attendees “deserve whats coming to them.”

“They took the risk knowing full well what might happen. BLM protests over the past 6 months are not informed about the pandemic?” Pink responded.

As fans claimed to have photographic and video evidence from Moyer’s now-private Instagram account of him at the Capitol building, Pink continued: “proof that i stormed congress. yeah i don’t see it. are u suggesting the congress building has a bed and breakfast we somehow got access to”?

Meanwhile, in an emailed statement to Pitchfork, Moyer claimed to have met with the musicians in the city to discuss a project unrelated to Wednesday’s events. She then “felt obliged to record what was happening” in Washington, D.C. as the events unraveled.

A look at Pink’s Twitter account shows he’s been vocal about his support for Trump. On Thursday, the artist tweeted, “vote for Trump.” He also previously shared his stance on Joe Biden’s presidential win.

Of Biden’s impending presidency, Pink said he’s come to the “sober realization that this is probably worst possible scenario.”